Unlike all other developed countries, the United States lacks a national policy on e-waste exports. The Secure E-waste Export and Recycling Act (SEERA), which was introduced in Congress this year as H.R. 3036 and Senate Bill 3859, provides a framework to prevent the export of untested, non-working used electronics and e-waste that is not destined for direct reclamation.

I don’t typically advocate for legislation, but I’m fully behind SEERA. The export of hazardous e-waste harms people and the planet. I’ve seen it with my own eyes. SEERA has evolved over the years to address the concerns and needs of various stakeholders, and I believe it provides the best framework to effectively restrict the export of hazardous e-waste and support responsible domestic and international processing of used electronics in the circular economy. More information about the legislation and its benefits is provided by the Coalition for American Electronics Recyclers, of which Cascade is a member.

SEERA is also included in Section 30612 of H.R. 4521, known as the United States Innovation and Competition Act of 2021. Versions of this bill have already passed the House and Senate with bipartisan support. It is currently in Reconciliation to determine the final contents of the bill. This is the furthest this legislation has ever gotten through Congress after nearly 10 years of debate and refinement. We need to get this legislation passed this summer!

We’ve all seen the stories about the dumping of hazardous e-waste in China and Africa (60 Minutes – 2008, Frontline – 2009, World Health Organization – 2021), and I think everyone agrees that practice is tragic and should be avoided. 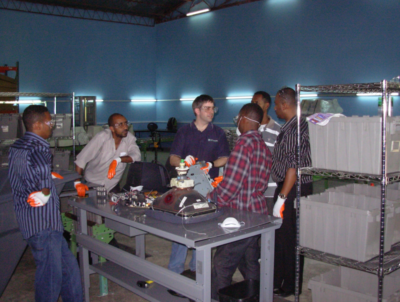 Many years ago, I was given the opportunity to serve as a Technical Consultant to the International Business Leaders Forum, which is a charity organized by the Prince of Wales – Prince Charles himself – to promote sustainable development with the support of multinational companies like Coca-Cola, Microsoft and Unilever.  My role was to help this organization establish a responsible IT asset refurbishing and recycling demonstration project in Ethiopia as part of a larger World Bank funded project to expand information technology access across the country.  I visited Ethiopia 6 times from 2007 – 2014, helping the project create a business plan, environmental health and safety program, asset tracking system, and training program.  At the time, no formal electronics refurbishing and recycling program was known to exist in the country.  Our goal was to establish a demonstration program that would serve to build a sustainable and responsible industry in the country to process domestic e-waste generated by government agencies, businesses, and individuals within Ethiopia. We made this video about the project.

After four years of work, EPA Administrator Lisa Jackson also visited the site and said, “The Ethiopian experience could be a model for the entire African region as the challenges and opportunities associated with electronic waste continue to grow.”

One of the challenges we had in the country, in fact, in the whole region of east Africa, was to find markets for some of the hazardous and low-valued demanufactured fractions the facility was to generate.  For example, what were we to do with all the CRT glass?  On one visit, we were hopeful to find a secondary lead smelter which would accept CRT glass for recycling.  We located a firm advertising itself on the Web which claimed to operate such a facility in Addis Ababa, Ethiopia.  With the help of a translator, we called their phone number, but couldn’t get through.  We had an address, so we tried to find it.  After driving around a residential neighborhood and asking local residents, we discovered the place was a hoax.  No such facility existed.

Similarly, we had difficulty identifying processors anywhere in East Africa that could handle mercury or cadmium from batteries.  There were not even any options for plastic recovery after calling dozens of so-called recyclers in Ethiopia.

Ethiopia’s Environmental Protection Authority was also heavily involved in the project, but their experience with this topic was limited.  I learned the only regulation under their authority at the time focused on the flower industry. They had no laws on hazardous waste management or e-scrap and they were just starting to develop some guidance for this industry.  And while Ethiopia is a signatory to the Basel Convention, which restricts the trade of hazardous waste from developed to developing countries, implementing a set of domestic hazardous and solid waste laws was all new to them. Six years after kicking off the project, the demanufacturing center got over-run. This video, filmed in 2014, shows piles of e-waste precariously stacked around workers. What happened??

The United States has not signed onto the Basel Convention so we are not bound by the terms of the Convention. Other countries can refuse to import our e-waste exports – and they do.

It first started when China laid down its “national sword” policy to ban the imports of anything but clean recycling scrap. That moved dirty e-waste to other Asian countries that offered cheap disposal options. Then, Malaysia, Vietnam, and Thailand started cracking down on e-waste imports.

While the US EPA lists certain requirements for the transboundary shipments of e-wastes, these restrictions are limited to domestic regulations in the Resource Conservation and Recovery Act (RCRA) or the Toxic Substances Control Act (TSCA). Export restrictions are primarily limited to CRT glass and batteries.

So why do we need SEERA if other countries don’t want our e-waste?

Hazardous and unprocessed e-waste will continue to flow to other countries without export controls from the U.S., putting the public’s trust about where their used electronics and data go at risk. In addition, without a clear set of rules for domestic e-waste collectors and generators, there’s ambiguity about how to manage e-waste legally and properly through international trade that may result in more returned shipping containers.

Even though the Basel Convention was ratified twenty years ago, there’s plenty of documentation of hazardous e-waste traveling from the U.S. to countries that ratified Basel. The environmental advocacy group Basel Action Network has monitored the illegal export of e-waste from the U.S. through it’s Transparency Project that places GPS tracking devices in used electronics dropped off at collection sites. MIT put together an interactive map charting the flow of this e-waste.

The most comprehensive study on e-waste exports from the US was conducted by the US International Trade Commission in their 2013 report “Used Electronic Products: An Examination of U.S. Exports.” https://www.usitc.gov/publications/332/pub4379.pdf. The research was based on a US Census survey sent to 4,701 qualified U.S. firms with 10 or more employees that were affiliated with electronic reuse and recycling. They received detailed responses from 2,670 organizations.

Notable findings from the USITC report include:

SEERA provides benefits to people and the environment

This legislation helps prevent the export of untested, non-working, used electronics and contaminated e-scrap materials. That protects people and the environmental around the world and in the United States because it fosters the responsible recycling industry.

It’s been estimated that SEERA would create nearly 42,000 new jobs with nearly one billion dollars in annual payroll in the U.S. by encouraging more value-added domestic processing. In addition, this legislation won’t take away good paying jobs from other countries. There’s plenty of e-waste material generated within countries around the world to support a robust recycling economy in developing countries, as I was able to see in Ethiopia. With SEERA, U.S. refurbishers can still export tested, sanitized, used electronic products around the world where technicians in these countries can re-image, resell, install, and maintain them.

SEERA provides added security to our data and supply chain

SEERA also closes security gaps that have led to data breaches, identity theft, and cybercrime. Currently, there are no requirements for U.S. companies that collect or process used electronics to sanitize the data from these devices prior to export, putting our private information at risk. SEERA will require companies that export to implement data sanitization processes and ensure no personal data remains on any devices in their export shipments.

Finally, e-waste exports also help fuel microchip counterfeiting, mostly occurring in China, that can result in unreliable components ending up in military hardware, critical infrastructure, healthcare technology, and more. These security vulnerabilities, which were detailed in a Senate Armed Services Committee study commissioned by the late Senator John McCain, continue to evolve in tandem with the dynamic, and expanding, e-waste landscape. SEERA addresses the counterfeit challenge by limiting exports of end-of-life circuit boards to final processors (like smelters) that must melt down the chips for recycling instead of allowing them to be harvested for reuse.

More information about SEERA and why it’s important to pass in Congress this year is provided on the CAER website.

Now is the best chance to pass SEERA while it is in Section 30612 of H.R. 4521– the United States Innovation and Competition Act of 2021. Please email your members of Congress to ask them to pass this Act with SEERA included. Details about how to make your voice heard are posted here.

SEERA will restrict the export of untested, non-working electronic scrap that too often ends up fueling the counterfeit market and damaging the environment. SEERA will also boost domestic processing, create jobs, and instill U.S. leadership in the e-waste processing dialogue.